//
you're reading...
True Stories: written as I remember

House of My Dreams

An eleven minute video of the house of my dreams

A few years before my husband Wayne died in 1991, he asked what sort of house I would like for him to build me. Being 14 years my senior, he was sure that I would outlive him and wanted to leave me the house of my dreams. He was a Master Carpenter.

He was 45 years old when we met; I was 31. At age 15, Wayne had been accepted into the Carpenter’s Union apprentice program in Waco, Texas.  Based on the hardship his mother and her three boys were suffering, the Local made an exception to his young age and admitted him into their fold. The day after we married he bought me a tool belt as a wedding gift; not only was I a new wife, but I also became a carpenter’s apprentice.

We discussed the idea of having children and at our ages, decided if we were serious about wanting to procreate we had better get busy. As newlyweds, getting ‘busy’ was already on our agenda. Wayne had been married four times previously, but this was my first marriage. After our first year of wedded bliss, we still had no children. Since he hadn’t had any offspring with the first four wives, I did not take it personally, and we remained childless.

Thirty-three years ago, Wayne and I were living the lifestyle of the “Tiny House Nation” program you may have seen on television. We lived within a 30’ x 30’ fenced in rental space. He had built himself a small home there before we met and made every inch of the space within that compound work for his living comfort. I was living in a 36′ Chevrolet School Bus, which had been converted into a super cool motorhome. We sold the bus, and I moved in with him.

In my early twenties, I became fascinated by the number 1111. I would see it often and in many different mediums. My address while living in the bus was 1111 Virginia Street. When I moved into Wayne’s home, his address was 1111 State Street. I was one happy woman and did not care about where I lived, just how; being in a loving relationship is as close to heaven as it gets in this world. Four years into our marriage and totally contented with our life together in our tiny home, I had no clue as to what to say about my idea of the house of my dreams. “Take some time to think about it,” he said, “I’m not leaving this life anytime soon.”

I had never really thought of having a home of my own; for many years, I was a “rambling gal,” rarely in the same place for any length of time. Now being married and with a husband who was offering to build me any style of house I wanted, I was going to take my time and think this proposition through. Every so often he would ask me if I had thought about what I wanted and my answer was, “Not yet, but I’m ‘a thinkin’.”

One day it came to me. “I don’t care what the house looks like,” I said, “But it should have a wraparound porch and a pond, close enough that I can see it from the porch. Also, it must have a bridge crossing over it.”  He laughed and said, “Well, Darlin’, you’re not too hard to please. Let’s start looking for the land.” Time got on by too quickly, and he never got to build the house of my dreams.

A several months after his death, I went to visit family in Southern Indiana where my father and his two sisters owned a log cabin rental business. Within months of that visit, I was compellingly drawn to move to this oddly named town of French Lick. A little over a year later I met and married my present husband, Randy and moved 23 miles west to a place called Huntingburg.

I had all but forgotten that fifteen years earlier my friend Cleo had talked me into going to see a fortuneteller in Houston. I was twenty-seven at the time and skeptical, but reluctantly went anyway. He seemed like a nice man and told me many things in general; they could have been about anyone. Then he got very specific and said that I was going marry a man from Waco. He sensed his name began with the letter “R”, but he was fuzzy on that. When I asked him if I would have children, he was positive about that and also said, that I would own land in Indiana!

When I became pregnant at age forty-three, the fortuneteller’s words came into focus: Wayne was from Waco, I am now married to “R”andy who already had a daughter, and two years into our marriage I’m having my first child. Together we have children! The predictions he forecast were spot-on, right down to my name being on the deed to our home in Indiana.

After all these events had taken place, my sister Mary moved from Oregon to French Lick in 1999. Being only 28 miles apart, we spent a lot of time together, even after she got married to her newfound soulmate, Larry. She called me one day and asked me to check out a Real Estate website showing a picture of a home she had seen earlier that day. Just out of curiosity she had gone to look at the property and said it was the most unique house she had ever seen! I looked at the site while we were still on the phone and got goose-bumps when I saw the pictures. At that moment, I did not know why the photos stirred me, but soon I would find the weighty significance.

I told Mary that I wanted to make an appointment to visit it too. She and I went together three days later. When I stepped out of the car, I told Mary that I was going to buy this place. She laughed and said, “You and who else?” My response was, “You and Me!” From the day I set foot on its ground, seven months later our brother Jim, Mary and I, with our spouses were at the bank signing closing papers.

A few days later, while sitting on the 1100 sq. ft. wraparound porch looking out toward the pond, our son Duncan was walking across its bridge. Although we bought it as a vacation/rental home, I had the house of my dreams.

Side note: The porch measures 1111 sq. ft. when the furnace room on it gets included and this story is 1111 words.

An eleven minute video of the house of my dreams 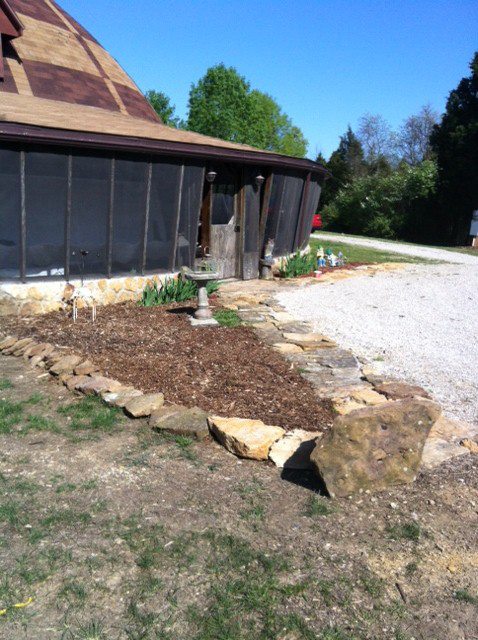 Owner of the French Lick Dome - Lodge & Retreat Center A 5 bedroom, 6 bath home on 22 acres A place to regain your health - both mental and physical
View all posts by Barbara Duncan Mathies »
« The Power of Love and Forgiveness
Early Head Apparel – the Child Hood »

4 thoughts on “House of My Dreams”